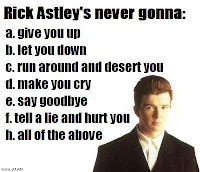 [Still Not Giving Up] -- On Thursday, 7/27/2017, a momentous anniversary in 80s music occurred. On that date, a certain Mr. Astley hit the charts with a ditty titled, "Never Gonna Give You Up." 30 years later,  that song, particularly its accompanying music video, is still popular. Its popularity, or at least its continued familiarity, is due in large part to a bait and switch practice that first started in 2007 and has come to be known as Rickrolling.

Because Rick Astley himself perpetrated the best Rickroll in the practice's 10 year history, I think I'll let his tweet serve as the entirety of this week's Flashback post.

Not to be outdone, Sesame Street replied in kind:

🎶"Always be by your side, take your hand & you'll take mine, always going to be your friend and love you!" 🎶 pic.twitter.com/Lb4QofJDVE
— Sesame Street (@sesamestreet) July 27, 2017

That's all till next time. Dedicated 80s-philes can find more flashbacks in the Prophet or Madman archives or via Bookended's 80s Flashback tag. As always, your comments are welcome on today's, or any other, flashback post. And if you like what I'm doing here, please share the link with your friends. If, however, you don't like the flashback, feel free to share it with your enemies.