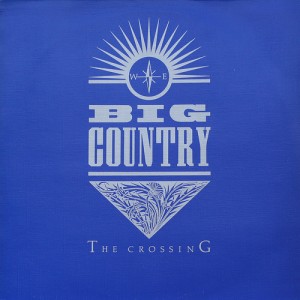 [Come Up Screaming] -- One of my favorite albums was released in 1983, specifically on July 15 of that year. It was an energetic album by a Scottish band. An album pulsing with guitar licks that mimicked bagpipes. I am, of course, talking about The Crossing by Big Country. It was the band's first studio release, and it reached #3 in the UK and #18 on the US Billboard 200. I'm pretty sure that the bagpipe trick had something to do with the album's popularity. I mean, it was a pretty neat effect. According to a few fan boards and Wikipedia, guitarists Stuart Adamson and Bruce Watson achieved the effect with the MXR Pitch Transposer 129 Guitar Effect and the e-bow, which is something of an electronic guitar pick. Anyway, if you're wondering which three tracks from this record I've chosen for this Flashback, you can read and hear more after the jump.

Flashback #1: "Between a father and a son | Between the city and the one."

This was the second single off The Crossing, but it was probably your first taste of the band. At least, if you're in the US, I'm betting you heard this song before you heard Big Country's debut single, "Horizon Home." You can see the music video here, and it really hammers home the song's lyrical context of war and fantasy. of the But for the post, I'm sharing the band's live Top of the Pops performance. Considering singer Stuart Adamson's sad end, I find it nice to see him enjoying himself. Also, I can't get enough of some of the dancers in the audience.

Our second Flashback track off The Crossing is that album's fourth and final single. "Chance" is a sparser, more melancholic song. And, lyrically, it also feels more personal than the previous singles. Maybe it was too personal for the American record buying public, or maybe Big Country's proverbial 15 minutes already ticked away, but this song didn't seem to chart in the US. It was, however, still a top ten hit in the UK.

Flashback #3: "I never took the smile away from anybody's face."

Here it is, our final Flashback of the day is the song that is synonymous with Big Country. I know, and you know, that you've been waiting for this track. "In A Big Country" was the third single off Big Country's debut album, and it was their best charting release. The thunderous drum intro (in the extended mix), the exhortation to "come up screaming," and, of course, those delicious guitar licks all combined for a truly special hit single. It reached #17 on the UK Singles Chart and #3 on the Hot Mainstream Rock Tracks in the US. It also peaked at #17 on the Billboard Hot 100 and #3 in Canada. Um, did anyone else notice that repeating occurrence of 17 and 3? That wasn't just me, right? OK, anyway, the band will be forever known for this song, and that's not a bad legacy for an 80s act.