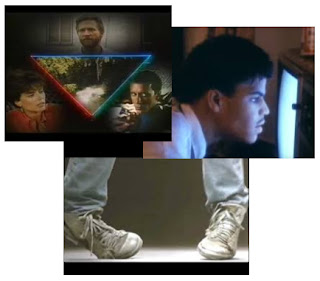 [April 7, 1984] -- Do you remember what you were doing this week in 1984? I know I was still in high school, but I have no specifics. I do, however, recall the tunes in this week's Flashback. Today we're revisiting the three tracks that topped the Billboard Hot 100 on April 7, 1984. We have two soundtrack songs, one of which is a ballad, and a song about paranoia. Man, and wait till you see how prescient that song turned out. Anyway, I'm getting ahead of myself. So, while I take a moment to sort myself, you click the jump so you can read and hear more after the break.

Flashback #1: "And you coming back to me is against the odds | And that's what I've got to face."

I previously featured Phil Collins in his own retrospective Flashback (Phil in the Blank, 3/25/2011). But that post didn't include this week's first Flashback tune, "Against All Odds (Take a Look at Me Now)." It was originally titled "How Can You Just Sit There?" when it was part of the sessions for Phil Collins' 1981 debut album, Face Value. This unused version formed the basis of the theme song for the 1984 movie of the same name. At this time in 1984, the song had jumped from #7 to #3 on the Billboard Hot 100. It would eventually peak at #1, making it Collins' first #1 single in the States.

"Somebody's Watching Me" was the debut single -- and future NSA theme song -- by Rockwell. Released in January of 1984, and powered by cameo performances from Michael Jackson and Jermaine Jackson, "Somebody's Watching Me" rocketed to the top of singles charts around the world. Don't believe me? Well, check out this table from Wikipedia:

That is some serious chart mojo displayed there. Unfortunately for Mr. Rockwell, his later releases lacked any of that charting prowess. I'm fairly certain "Somebody's Watching Me" succeeded solely on the merits of Michael Jackson's voice appearing in the chorus (I'm sure Jackson's name was also mentioned each time the tune played on the radio, and that probably didn't hurt sales). The low-budget music video capitalizes on the song's paranoid tone with a haunted house motif, and that makes it perfect for Halloween.

I always seem to think it was "Cum On Feel the Noize" that was playing on Ren McCormack's car stereo when police pull him over early in the movie, Footloose (1984). But it was "Bang Your Head (Metal Health)" in that brief scene. Of course, that has nothing to do with our final Flashback of the day, aside from the fact that it appears on the same soundtrack. No, our third and final Flashback today is reserved for the movie's theme song which was spending its second week atop the Billboard Hot 100. Of its total 23 weeks on the charts, it would spend three of them in that #1 slot. To this day, it remains one of Kenny Loggins' best recognized songs.