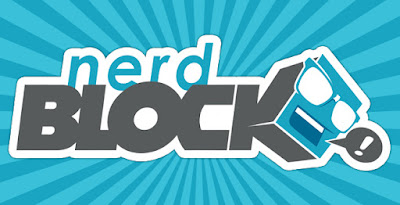 About two weeks ago, we mentioned that we had added another subscription box to our list. We have a three-month subscription to @NerdBlock's Comic Block. Each Comic Block is supposed to come with three cool comics and some other cool stuff. Well, our first box -- the July 2015 Comic Block -- arrived on Friday, so it's time to start talking about it.

Why? Because we opened it!

Let's see what's what in here, shall we?

And the first item in the box is ... Well, all right, this is rather timely: An Ant-Man t-shirt. We saw the movie just last Sunday! This shirt is from ShirtPunch, and it comes with a promo code for 10% off at their website (www.shirtpunch.com).

Next up, something for the Tony Stark in your life -- an Arc Reactor coaster! This looks like it's made the same way as a button/badge, But instead of a pinback, there is a backing of cork. It's a fairly high quality print, and it's kind of slick. So, we probably won't use it for drinks -- Dangrdafne points out that any container with a bit of condensation on it will likely slide right off this thing. However, it could serve in a pinch for a civilian Tony Stark cosplay (a fact that is also pointed out on this Comic Block's info card).


Now we're past the "stuff" and getting into the namesake of the Comic Block: it's our first of the three comic books! First up is Star Wars Lando #1. This is Marvel's fourth solo, and fifth overall, series in their newly relaunched Star Wars line-up. (The other titles are Star Wars, Star Wars: Darth Vader, Star Wars: Princess Leia, and Kanan: The Last Padawan). And, if I'm not mistaken, it's the first time Han Solo's Cloud City administrating (and puffer pig collecting) pal has his own comic series. I'm not collecting Marvel's Star Wars books, but it's still cool to now have this #1 in my collection. Comic Block shipped it in its own bag and board, too.


The second comic in this month's Comic Block is Negative Space #1 from Dark Horse. This book is written by Ryan K. Lindsay and drawn by Owen Gieni (who also provided the cover art). It's in the Fantasy and Horror genres, which I think you can tell from that cover image. Although this book wasn't really on my radar, it's a miniseries and I might be tempted to get the remaining issues if this turns out to be an engaging read. Instead of a bag and board, this one came shrinkwrapped.


Our third and final book is the one that motivated me to try out this service: an exclusive cover for the first issue of IDW's Star Trek / Green Lantern crossover series! I love this cover's image featuring all nine Lantern insignias surrounding the USS Enterprise. And, down in the lower right hand corner, the Comic Block logo is proudly displayed. This book, too, is shrinkwrapped. And that's fine with me because I have at least one other reading copy available to me.


For reference, here is the front and back of the July 2015 Comic Block info card: 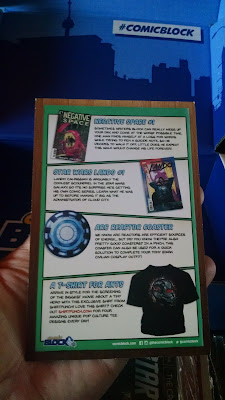 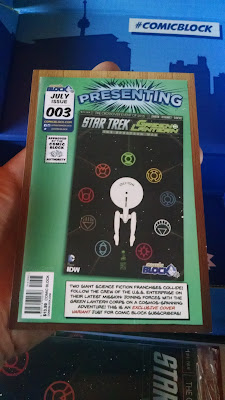 Well, I've enjoyed this initial foray into Nerdblock. I give it 4/5 cat paws:

We have two more boxes on our subscription. So, as the now-empty box says, this series of posts is TO BE CONTINUED... 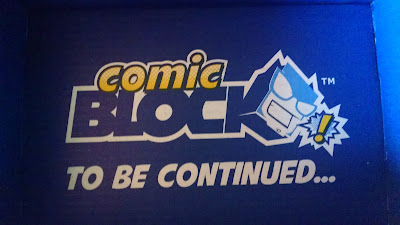