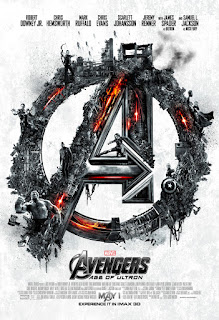 So we finally got out to see Avengers: Age of Ultron. It seemed a very appropriate movie for Memorial Day. Although this movie has been out since May 1, and even though you've had every chance to see it before we did, we still feel the need to post a little warning: Our review is filled with SPOILERS. If you're OK with that, you can read more after the break.


Dangrdafne: I will start by saying I have no background in any of the comics, these characters, or the stories they are based upon. I have watched The Incredible Hulk TV show from the 70s, and I have seen the previous Marvel movies leading into Avengers: Age of Ultron. But I do not know the comic book history at all. With that said I loved this movie. All it was missing for me was Agent Phil Coulson!

I am amazed that I was not spoiled, too. I had no idea that Fury would be in it, or that War Machine and Falcon would show up. I loved learning more about Black Widow and Hawkeye (I didn't know he had a family!). I loved watching all this funny interactions between all the characters. Everyone picking on Cap for "Language" was the best. And I definitely don't know anything about all the hullabaloo on the web complaining about Black Widow in this film; I saw nothing in the movie that made me question anything about her or how her character was written or even shown in this movie.

The only drawback I would say was I felt that the Hulk vs. Iron Man fight was a bit too long. And hilariously I had no idea that this was a long awaited piece of this movie. Brainwise had to re-inform me of HulkBuster… which I thought was something the Hulk would have/wear. Apparently it is the Iron Man suit that Tony Stark uses to fight Hulk. Ooooops.

I liked the new characters Quicksilver and Scarlet Witch. When Scarlet Witch chose to come out of the house and become an Avenger, I almost cheered out loud and I definitely teared up. I was so proud of her and her choice. I am grateful that these two new characters understood the cost of human life was not worth standing with Ultron. I also loved how The Vision understood this too.

My other emotional point was when Quicksilver died. It was completely unexpected and it was to save Hawkeye and a human child. It broke my heart when he said "I didn't see that coming." *sniff sniff*

I am excited to see where we go next.

I give Avengers: Age of Ultron 5 paws!

Brainwise: As has been pointed out before, I'm the comic book aficionado in our home. Now, having said that, I must also point out that I read more Marvel in the 70s than I have of late (though a few more Marvel titles have joined my weekly pulls, and Marvel Unlimited can be your friend if you want to blow through a bunch of back issues). Still, I was excited to see the Avengers translated to celluloid once again. And, for the most part, Avengers: Age of Ultron was a fine piece of popcorn cinema to see on Memorial Day.

Things that were great:

Things that were not so great: