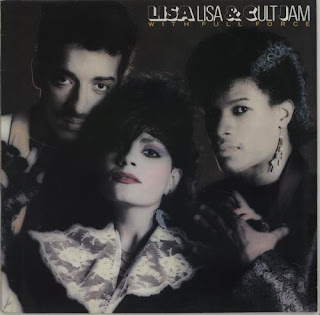 [A Cult Jam] -- I found three separate release dates for Lisa Lisa & Cult Jam with Full Force, the 1985 debut album by, well, Lisa Lisa & Cult Jam. Wikipedia's list of 1985 releases cites 8/8/1985 as the release date, but the Wikipedia page for the album has the release date as 3/17/1985 in the intro paragraph and 9/17/1985 in the sidebar. Even more confusing, AllMusic.com has a release date of 12/17/1985. Whatever the actual release date was, the bottom line is that, before the end of the year, no one outside of Lisa Velez's family probably used her last name anymore. She was Lisa Lisa, the voice and face of the hit song, "I Wonder If I Take You Home." That hit and the other two singles await you after the jump.

Flashback #1: "I'm not to sure about how you feel."
"I Wonder If I Take You Home" was the lead single off Lisa Lisa & Cult Jam's debut album. Highlighting the tensions around one night stands, this tune peaked at #1 on the Billboard Hot Dance Club Play chart, #6 on the R&B chart, and #34 on the Billboard Hot 100.
Flashback #2: "Don't you know my tears will burn the pillow."
The ballad "All Cried Out" was Lisa Lisa's third single off her band's debut album. It hit #8 on the US Billboard Hot 100 and #3 on the US R&B singles chart. The 7" version is credited to Lisa Lisa and Cult Jam with Full Force featuring Paul Anthony & Bow Legged Lou.
Flashback #3: "Can't you see that you must be a part | Of that beat in my heart? That beat in my heart, that beat."
"Can You Feel the Beat," the sophomore single off Lisa Lisa & Cult Jam with Full Force, was a hit on the Billboard Dance chart, peaking at #six. It had various levels of success on other charts, hitting #69 on the Billboard Hot 100, for example.
Once again, I remind you that the rule of three applies when doing Flashbacks. As I've made my three offerings, that's all till next week. Dedicated 80s-philes can find more flashbacks in the Prophet or Madman archives or via Bookended's 80s Flashback tag. As always, your comments are welcome on today's, or any other, flashback post. And if you like what I'm doing here, please share the link with your friends. If, however, you don't like the flashback, feel free to share it with your enemies.
I'll see you in seven!
Posted by Brainwise at 8/07/2020 01:00:00 PM