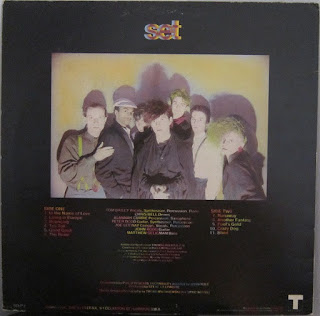 [RIP Matthew Seligman] -- Today, New Wave lost a seminal behind-the-scenes musician: Matthew Seligman. He had played bass with the Soft Boys, Thomas Dolby, David Bowie, and Thompson Twins. Seligman's declining health was chronicled by Dolby on Facebook, a decline initiated by a catastrophic hemorrhagic stroke according to ultimateclassicrock.com. Seligman played on only the second Thompson Twins record, 1982's Set, but he did perform with them a bit. So, let's revisit that album in his memory after the jump. (For a much longer playlist covering the breadth of Selman's career, visit this Spotify playlist).

Flashback #3: "It's cause we're living in Europe."