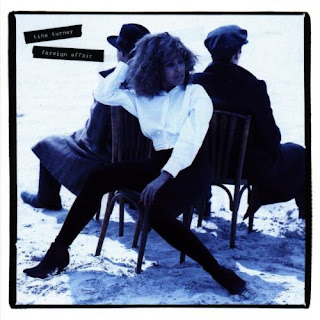 [An Affair Less Remembered] -- Another Friday the 13th has rolled around, and I briefly thought about a horror or bad luck theme to honor the rare occasion when the Flashback crosses paths with Friday the 13th. But, no, I'm not going there. Instead, I'm going to tell you about a record that is celebrating its 30th anniversary on this date: Tina Turner's seventh solo album, Foreign Affair (1989). It launched six different singles, only two of which were able to crack the top 40 of the Billboard Hot 100. The album itself peaked at #31 on the US Billboard 200. And while the record sold over 6 million copies, it was not as commercially successful as her two prior outings, Private Dancer (1984) and Break Every Rule (1986). You don't recall Foreign Affair? Well, I'm sure you remember one single from it. Let's see if you do; just read and hear more after the jump.

Flashback #1: "We was snuggled up in the back seat | Making up for lost time."

"Steamy Windows" is probably my favorite track from Foreign Affair. It's the most unabashedly rock and roll song on the album. It barely cracked the top 40, landing at Billboard Hot 100's #39 spot and #33 on the US Dance Club Songs chart. It really deserved better.

Flashback #2: "Look me in the heart | If you think that love is blind."

"Look Me in the Heart" was Turner's highest charting single off Foreign Affair. It peaked at #4 on the Adult Contemporary Chart.

Flashback #3: "You're simply the best, better than all the rest."

At the outset of this week's Flashback post, I said there was probably one song you'd remember from Foreign Affair even if you didn't recall the album. Well, here it is. Tina Turner's cover of "The Best"! This single peaked at #6 and #15 on the Mainstream Rock Tracks and Billboard Hot 100 respectively. You didn't realize it was a cover? Bonnie Taylor originally released it on her 1988 album, Hide Your Heart. Taylor's version was released on September 2, 1989, in advance of Foreign Affair. And you probably know it because it has been used in all sorts of sporting events as well as commercials, notably for HBO and Applebees.