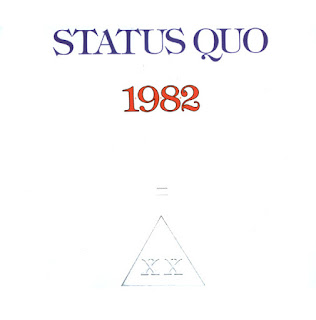 [1+9+8+2] -- I have something of a treat for you 80-philes this weekend. English rock band, Status Quo, is anything but the status quo. They formed in 1962 and they are still active -- that's six decades of recording and performing! Seven of their 32 studio albums were released in the 80s. They even performed at Live Aid in 1985. Yes, the lineup has changed over time, and so has their sound. In the 80s, they were still playing the hard boogie rock style they had adopted in the 70s. 1+9+8+2 (1982) was their 15th studio LP, and it represented the 20th anniversary of the first meeting between guitarist Francis Rossi and bassist Alan Lancaster. Hence the XX ("20" in Roman numerals) on the album cover ... and because 1+9+8+2 = 20. Now, even by the 80s, over 30 years ago, there was a sense of "been there, heard that" in regards to Status Quo. Some critics even said the band's late 70s and early 80s works were a parody of their earlier endeavors. And the critics weren't exactly wrong. But, maybe, not every record has to be groundbreaking and trendsetting. Sometimes, maybe, you need more of the same. Something comfortable to slip onto the turntable. And that's certainly the case with 1+9+8+2. It's not bad, but it's fun. You won't be humming these tunes an hour later, but while this record is spinning, you just might bob your head and tap your foot along with it. With that sincere plug, read and hear more after the jump!

The first and only successful single off 1+9+8+2, "Dear John" peaked at #10 in the UK. But most US record buyers gave it a pass. Here we have a performance on BBC's Top of the Pops. (And I love the announcer equating his own age with the band's).

This is not "I Love Rock 'n' Roll" by Alan Merrill (1975) and later made famous by Joan Jett & the Blackhearts (1982). No, this is an entirely different song written and sung by Status Quo's bassist, Alan Lancaster. What it lacks in grit, it makes up for in ... well it has ... y'know, I'm not quite certain what to say about this middling tune other than I like it.

Flashback #3: "Nothing to pack, polish my act, Lord | I'm gonna play some rock and roll."

It's a Passover and Easter weekend, so why not a little "Resurrection" on the Flashback? Maybe you, too, will be called back to rock and roll.