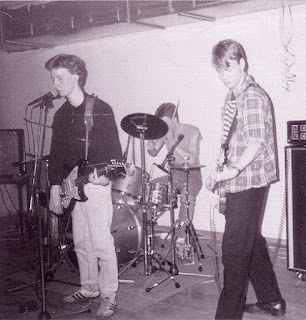 [Iceland's Daisy Hill Puppy Farm] -- Just before I left for Iceland last week, I posted a Flashback featuring the Sugarcubes. Well, I returned from Iceland very early this morning, so how 'bout we follow up last week's post with one about another 80s Icelandic band? If you're up for it, I've got just the thing for you, especially if you're into shoegazers and ear bleeders: Daisy Hill Puppy Farm! According to Rok (rokmusik.co), Daisy Hill Puppy Farm was active between 1987 and 1990. During that time, they released an eponymous 7" EP in 1988 and a 12" record, Spraycan, in 1989. And, yes, they were apparently named after the farm where Charlie Brown got his dog, Snoopy, in the Peanuts comic strip. The band's frontman, Jóhann Jóhannsson (9/19/1969 - 2/9/2018), became a solo artist and then a well-known TV and film composer. If you ask me, that is quite the career arc. If you want to know what his music was like before he composed the soundtrack for, say, The Theory of Everything (2014), you can hear more after the jump.

Flashback #2: "Once I had a love and it was a gas | Soon turned out had a heart of glass."

Daisy Hill Puppy Farm's eponymous 1988 EP featured a cover of Blondie's "Heart of Glass." I kind of wish they had sung the song in Icelandic, or at a more upbeat tempo, but I still kind of dig it.

Image credit for this post's top photo goes to this.is where it accompanied an mp3 link for a Daisy Hill Puppy Farm recording of "Speedball."

And with that, I remind you that the rule of three applies when doing Flashbacks. As I've made my three offerings, that's all till next week. Dedicated 80s-philes can find more flashbacks in the Prophet or Madman archives or via Bookended's 80s Flashback tag. As always, your comments are welcome on today's, or any other, flashback post. And if you like what I'm doing here, please share the link with your friends. If, however, you don't like the flashback, feel free to share it with your enemies.