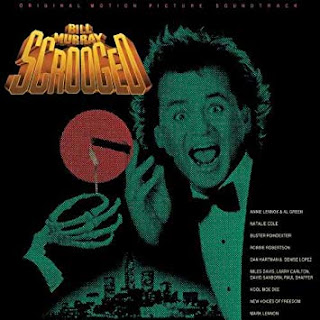 [Scrooged] -- There was a time when the phrase, "Bill Murray is starring in a comedic take on Charles Dickens' immortal classic, A Christmas Carol," might have prompted disbelief. Hel, it might even have given some folks cause for concern. But Scrooged (1988) wasn't a complete train wreck. It wasn't exactly a runaway hit, either. Even though I do count myself among the fans of Scrooged, I'm a little surprised to be typing my next sentence: Scrooged became 30 years old as of November this year! Was it ahead of its time? Has it aged well? These are questions I'll leave to others. I'm more interested in the soundtrack. Of course, Danny Elfman composed and recorded the film's score. But I'm talking about the pop radio soundtrack, tunes that tried to enter our annual vernacular of Holiday music. Now, not every track on the Scrooged Original Soundtrack (1989) was Christmassy. But if you want to revisit the few that were, well, read and hear more after the break.

Near the beginning of the film, Bill Murray's character, Frank Cross, complains about a group of street musicians. Those musicians just happen to be Larry Carlton, Miles Davis, David Sanborn, and Paul Shaffer playing "We Three Kings." And their rendition opens the second side of the soundtrack album (or it's track #6 on CD or MP3 albums).

Flashback #2: "Son of a carpenter, Mary carried the light | This must be Christmas, must be tonight."

Originally recorded by The Band and nearly forgotten back in 1977, “Christmas Must Be Tonight” found new life in a re-recording by composer Robbie Robertson. It still didn't light up the charts, but at least it is somewhat better known now due to its connection with Scrooged.

Flashback #3: "You see, it's getting late, oh, please don't hesitate | Put a little love in your heart."

The crown jewell of the Scrooged soundtrack has to be this duet between Annie Lennox and Al Green. It's a cover of Jackie DeShannon's original 1969 hit suitably worked up for the 80s. On paper, it doesn't seem like Lennox and Green's voices should work together, but they do. I'm sure the singers' individual senses of professionalism had something to do with that, but I can't help but think this specific arrangement had a bit of a hand in this cover's appeal, too. And it did have appeal. It peaked at #9 in the US on the US Hot 100 and #2 on the US Adult Contemporary chart. The music video features both Lennox and Green performing amidst scenes from the film. And it doesn't matter if the year is 1969, 1988, or 2018: "Put a little love in your heart" is a message we all still need.