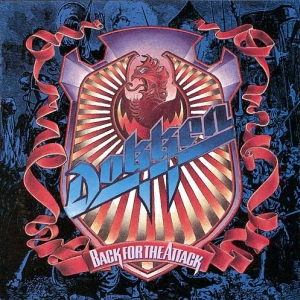 [Back for the Anniversary] -- In the "Things that Make Me Feel Old" Department, November 2017 marks the 30th anniversary of Dokken's fourth studio album, Back for the Attack (1987). According to at least one source, this album might have been released on November 2, 1987, so it could very well have turned 30 as of this very week. But, not every source marks the month and day, so we won't dwell on such particulars. Although it didn't pack highly catchy tracks like previous releases, Back for the Attack ranks among the band's best-selling albums. It even reached #13 on the Billboard 200 for that year. Maybe that chart success is due to Dokken going for a tighter and harder edged sound. Maybe it's due to the lack of ballads (well, there is one on this record) and a lesser reliance on trying to score pop-radio leaning singles. All I know is that this album has some delicious guitar work and probably the cleanest, albeit simplest, rhythm work of their whole catalog.

You can listen to the full album here. If you want to know which tracks I chose to celebrate this 30-year anniversary, you can read and hear more after the jump.

Flashback #1: "I lie awake and dread the lonely nights."

Dokken released Back for the Attack with a remix of "Dream Warriors," the theme song for the movie A Nightmare On Elm Street 3: Dream Warriors. Originally released in February of 1987, for the movie soundtrack, "Dream Warriors" peaked at #22 on Billboard's Mainstream Rock chart. I don't know much about the movie, but I do like this song's anthemic feel. And the official music video has the humorous tack of mixing movie footage with band performance footage. For example, you can see Patricia Arquette be startled, and then intrigued, by first guitarist George Lynch and then the rest of the band. And Don Dokken's falsetto nearly drives Freddy Krueger to a fit.

Our second Flashback of the day is "Mr. Scary," the instrumental by guitarist George Lynch and bassist Jeff Pilson that appeared on Back for the Attack as track #6. It wasn't a single, but Halloween was this week, so why not include an appropriate track here, right? Oh, and "Mr. Scary" is also the nickname for one of George Lynch's guitars which paved the way for a line of custom guitars (a man's got to do something after his 80s fame flares out). But that's not important right now, the music is. There's no official music video, as far as I can tell, so I've embedded the best YouTube video I could find for the LP version of this song. If you're interested in seeing George Lynch shred, check out this "studio live" video instead.

Flashback #3: "It's our love that's burning | Burning like a flame."

"Burning Like a Flame" was Dokken's last single for 1987. It peaked at #20, #72, and #78 on the Mainstream Rock, Billboard Hot 100, and the UK Singles Chart respectively. I know I mentioned Back for the Attack's less radio-friendly approach, but "Burning Like a Flame" does have all the hallmarks of a rock radio hit. Plus, the video features the band as rock-and-roll firefighters (way to hit the song concept right on the nose, fellas). And it features entertaining animation mixed with the live action. Speaking of the music video, it does leave me with one question: If the four members of Dokken are the only firemen in that hall, who the heck is driving the fire engine?