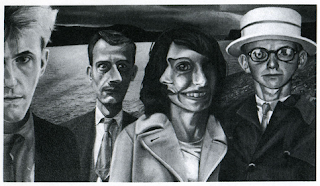 [Human's Lib is 33!] -- Howard Jones' debut album, Human's Lib (1984), was the first compact disc I ever purchased. In fact, I purchased it before I even owned a CD player. You see, I was saving up for the player, and I just wanted to ensure that I had something on hand when I finally connected it to my stereo system. Anyway, Human's Lib was released in the UK on March 17, 1984, and entered the UK Album Charts in the #1 spot. It hit the US in June of that same year. Human's Lib spent a total of 57 weeks on the UK charts and has been certified 2× Platinum. It also went Gold in many European countries and the US. All four singles from this album reached the UK top 20, the first two of which even reached the US top 50. None of that is surprising as this album is so full of 80s pop goodness that just about every track could be considered a true gem. But ... I can choose only three to share with you this week. So which tunes made the cut this week? Read and hear more after the jump.

Flashback #1: "Throw off your mental chains."

There there is only one song that could kick off today's Flashback: Howard Jones' bouncy, practically effervescent, debut single. Yes, I'm talking about "New Song." In the US, "New Song" peaked at #27 on the Billboard Hot 100. Now, turn your attention to the music video and note the dancer/mime featured in it. If memory serves, this guy was seen at some early HoJo concerts, dancing of his own volition and greatly entertaining the audience. So Jones took the logical step and invited the man to join him on tour. See what can happen when you follow your heart?

Released in 1984, "Hide and Seek" paints a picture of a cosmic being who engages in creating an entire universe while hoping that the created will find the spark of creation within themselves. This theme is repeated in the story of a young woman who plays the game of life while trying to find where she had hidden herself in a world of her own creation. This song offers no pat answers, no stunting dogma. Where is the cosmic being now? Did that woman find herself? We don't know. We are left only with our questions and a simple message, "Hope you find it in everything." As such, "Hide and Seek" imparts a quietly hopeful message amidst the somber and sometimes heavy synthesizer music.

Flashback #3: "Can anybody love anyone so much that they will never fear?"

Our final Flashback is the second single off of Human's Lib and Howard Jones' highest charting single overall. "What Is Love?" peaked at #2 in the UK and at #33 on the US Billboard Hot 100. It also charted within the top 20 charts of several countries, such as Belgium, Germany, Ireland, Italy, Norway, Poland, and Sweden. Seems that Jones' techno-pop was better received on the other side of the Atlantic. The music video has Jones walking around a city and a park. Oh, and a lost balloon. All three are pretty much stock concepts for 80s videos. But they don't seem cliched when Jones does them. Well, not entirely, anyway. Maybe that's due to the interesting gimmick of Jones miming scenes that other people end up acting out. He's separate, yet connected. And when you get right down to it, "How can we be separate yet connected?" is almost as pesky a question as "What is love?"