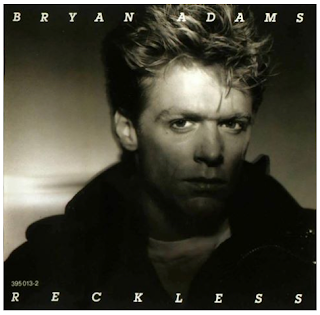 [Feeling Reckless] -- In November of 1984, Canadian rocker Bryan Adams released his fourth studio album, Reckless. It launched a string of six singles, all of which reached the top 15 on the US Billboard Hot 100 chart. The success of those singles drove Reckless to become Adams' first #1 album in the US. As that happened this very week in 1985, we're featuring tracks from Reckless on this weekend's Flashback. With a total of 10 tracks and over half of them top-charting singles, which three did I choose? For the answer, read and hear more after the break...

Flashback #1: "Oh, when I look back now | That summer seemed to last forever."

"Summer of 69" was the fourth single off Reckless (1984). Released in June of 1985, it peaked at the #5 slot on the US Billboard Hot 100 and was commercially successful around the globe. "Summer of 69" was one of the first songs I played in a band, though we changed the lyrics to "Summer of 85" for possibly obvious reasons. No one outside of our makeshift band heard that performance, however, as it was in an enclosed back porch rather than a club. Still, I felt every bit the rock star for those three and a half minutes.

The ballad to end all ballads, right? Maybe, maybe not. But when "Heaven" was released in April of 1985, it climbed the Billboard Hot 100 all the way to #1. So, in June of 1985, you would have been hard-pressed to find a more saccharine, more long-distance-dedicated song on the radio. OK, neither of those claims are true, but it certainly felt that way. Or at least I remember it feeling that way.

Flashback #3: "Musta turned the dial for a couple of miles | But I couldn't find no rock 'n roll."

"Kids Wanna Rock" was never released as a single, but it was a B-Side for "Summer of 69." And that's close enough for me to feature it as our final Flashback. Besides, how can you not fall in love with this earnest and cheesy appeal to a musical genre dying in the midst of disco and New Wave. OK, rock hasn't died (yet?), but even 30 years ago, 20-somethings were bemoaning what they perceived as computerized and homogenized claptrap invading the radio. The more things change, the more they stay the same, eh?