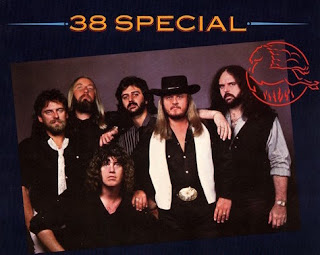 [Summer Special] -- As I mentioned over at Prophet or Madman, new Flashback posts will be found here at Bookended by Cats. I actually had the inkling to move my musical musings here for probably last two weeks, but now I'm acting on that impulse. And I'm bringing you a rock block from one of my favorite 80s rock bands: .38 Special. I bet you're surprised that a southern rock band makes my list of faves. Then again, if you know of my Pennsyltucky roots, maybe my fondness for the Special isn't such a surprise for you.

Now, .38 Special always struck me as a Summer band even though several of their records were released during winter months. But I guess I remember them more in a Summer vein because I have such great memories of singing along whenever their singles came on the radio. And, of course, the best times to do that were during the summer months with the windows rolled down. For my rock block, I'm picking one song each from a trio of albums which were released during the years I think .38 special were at the peak of their hit-making powers. If you want to know what songs made the cut this week, you can read and hear more after the break.

Flashback #1: "You see it all around you | Good lovin' gone bad | And usually it's too late when you | Realize what you had.

Released in February of 1981, "Hold on Loosely" was the first single from .38 Special's fourth studio album, Wild-Eyed Southern Boys. It peaked at #3 on the Hot Mainstream Rock Tracks and #27 on the Billboard Hot 100. And, just in case you were interested, it was playing in the cafeteria this afternoon, and I had to stop and enjoy the whole song before I walked back to my cubicle.

Flashback #2: "It took so long to change my mind | I thought that love was a game."

Like our previous Flashback tune, "Caught Up in You" was the first single released from its album, Special Forces (1982). .38 Special's fifth studio album, Special Forces reached the #10 position on America's Pop Albums chart. And while "Caught Up in You" reached #10 on the Pop Singles chart and also hit the #1 position on the Mainstream Rock chart, it also served as a gateway to an album chock full of guitar-driven and energetic tunes. The slick polish provided by recording engineers Rodney Mills and Greg Quesnel cemented .38 Special's place among Top 40 acts and expanded their fan base considerably. Still, as much as I enjoy this song, it's not really danceable, so I do find the dance floor scenes in this video high-larious. Also, I want that guitarist's yellow vest. Like a kid who wants a toy that he knows is bad for him. Seriously.

Flashback #3: "I've been lost inside | Empty space in my heart | And some things never change."

"If I'd Been the One" marks the point in .38 Special's career when they transcended their southern roots-and-boogie rock roots. With this song, and the entirety of their 1984 album, Tour de Force, they joined other MTV rocker darlings in heavy rotation. And the fact that they embraced the video medium with more stylized graphics and outfits probably helped in that regard. Tour de Force peaked at #22 on The Billboard 200 (albums), and "If I'd Been the One" was a #1 hit on the Mainstream Rock chart while also cracking the top 20 of The Billboard Hot 100 (peaking at #19).

Once again, I remind you that the rule of three applies when doing Flashbacks (and rock blocks, it would seem). As I've made my three offerings, that's all till next week. Dedicated 80s-philes can find more flashbacks in the archives. As always, your comments are welcome on today's, or any other, flashback post. And if you like what I'm doing here, please share the link with your friends. If, however, you don't like the flashback, feel free to share it with your enemies.